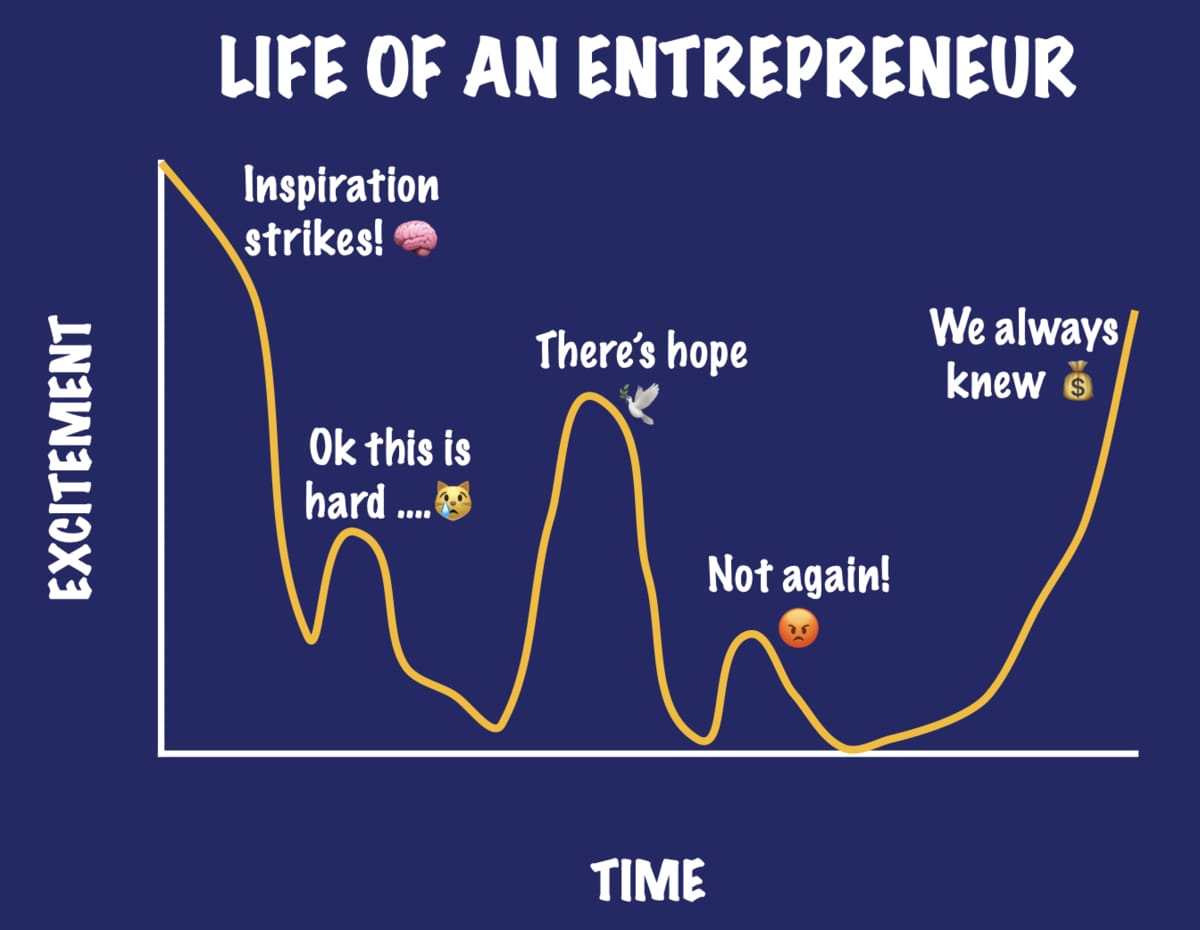 TLDR: employees gets a sense of small, continued progress, entrepreneurs ride a rollercoaster with no seat belts; it’s a mental game that requires new skills

Since I quit my job, I’ve received a lot of questions: “Do you regret turning down your Instagram offer?”, “What are you doing now?”, “How does it feel to be free?”

A month in, I wrote an optimistic piece. Four months in, I’ve stepped out of the honeymoon and woken up to the good, bad and ugly of being a solo entrepreneur.

Let's cover wrong assumptions about starting a business, difference between employee vs. entrepreneur, and applying vs. unlearning PM skills.
‍

First, why did I quit again?

There are two predictors of quitting your job:

If you lose hope in both, you’re forced to look for greener pastures.

I hung out in the bottom left corner for months. At first, Group PM was exciting, but I learned the hard way that the tasks you do > the title you carry.

I dreaded the tasks of middle management: I had to shift away from the pixels, didn’t control the big picture, yet still needed to project authority to convince new recruits.

On my best days, I was good at the game, it just wasn’t the game I wanted to play. I decided I would create a new one and write the rules this time. But making it work is no easy feat!
‍

A blank canvas offers infinite possibilities. Turning that canvas into a plan is surprisingly difficult. As a PM, I’ve planned countless roadmaps, but each time there were preset constraints: market, customers, business model. The canvas was always built, you just had to find the promising areas.

I got my first taste of unbounded freedom during a call soon after I quit my job. It struck me that our conversation could lead anywhere. Maybe a book, a podcast, a company, nowhere at all. When the possibilities are endless, the path forward can also be paralyzing. Total freedom means total responsibility.

Since that moment, I’ve been glad I made the leap now vs. in 5 years. Entrepreneurship requires learning lots of new skills. Having time on your side can be the difference between feast and famine.
‍

When making something new, there are two big exciting moments. The first is the beginning when inspiration strikes. The second is when the idea works. But between these two moments, there’s an unpredictable, anxiety-ridden stretch of time.

That in-between is unavoidable and yet rarely talked about because it’s so unsettling. As an employee, you usually feel a sense of visible, linear progress. As an entrepreneur, you’re on a rollercoaster with no seat belts and no guarantees.

Much of our identity is tied to work. When you go from employee to entrepreneur, you need a new identity. But instead of a gentle onboarding, you’re lurched into this rollercoaster. For there to be highs, there has to be lows. And the lows are gut-wrenching. They can be fatal unless you ground yourself.

Here’s the identity that has helped me: I make bets to learn — I aim for success, but also expect many painful failures. The end goal isn’t to quit once I reach a milestone, it’s to stay in the game and have fun.

On a long enough time scale, everything turns into a mental game. Can you create a roadmap that drives outcome and manages your own psychology? Can you persist long enough to reach breakthroughs?
‍

I’ve devised a few coping strategies. First, I only work on 2 things at a time, preferably one exciting project and one important project.

Remaking my landing page was my exciting project, learning SEO was my dry but important one. I switch between the exciting and important to create my own sense of steady momentum. It also helps me prolong the peaks and endure the valleys because I have a mix of both, rather than weeks in a sunken valley.

Second, I try to be thesis-driven about what I’m working on. For every project, I jot down why I think it will be impactful. As the results roll in, I can return to my original notes and update my thinking. The point is to get better at picking and predicting.

Third, I set weekly milestones to keep sprints short. This gives me a sense of progress, even if it’s arbitrary! It also forces me to scope things down so I can test for traction, internally (am I still excited about this?) and externally (is this making a difference?). Example milestones:

I can pivot quickly and work on what I think is right, rather than what I thought was right.

Finally, if something gets traction, I double down even at the expense of starting something new and exciting. I learned this from my PM days — there’s a lot of juice to be squeezed if you find the right orange.

That’s the perfect scenario anyway, but many weeks are far from perfect.
‍

I pictured entrepreneurship as being mostly in the clouds, dreaming of a better future. In reality, I’ve been buried in the dirt a lot.

When you’re doing your own thing, the buck stops with you. And there are some really random bucks that bomb your whole day. Examples: broken integration turned into a 3-hour troubleshoot expedition, domain transfer unravelled into 2 hours of updating links; setting up analytics took several days of navigating edge cases.

No job can prepare you for little fires that threaten to burn down the whole house.

To deal with this, I document to make the next time easier. I also tell myself that one of these nightmares could lead to an exciting idea. Necessity is the mother of all inventions, right? I now have a growing list of all the things I wish existed.
‍

When you’re on your own, it’s easy to fall into your worst habits. I’m a perfectionist, so I can sink days into tiny details. This was less harmful when I worked on a team with many hands to pitch in, but now it can distract me from what’s most important. I’m getting better at policing myself.

I also no longer have the luxury of huge traffic to experiment on. It’s been replaced by faster decision-making based on intuition from my PM days (e.g., plaintext emails outperforms marketing templates, complexity kills engagement). It’s nice to have failed on other people’s dimes, so you know which landmines to avoid.
‍

“Would I want to do this again?”

That’s the question I find most useful in determining whether to soldier on. Despite the little annoyances and fog of uncertainty, everything I’ve worked on (this site, Product Toolkit, Top Startups) are things I would easily do again.

To answer the opening questions: I doubt I’ll make the $375K that Instagram offered, but I also know I won’t regret learning and living on my own terms.

During the low points, freedom can turn salty, but when you zoom out and realize you enjoy the journey, the score takes care of itself. If you believe in yourself and brave through the uncertainty, there is simply no better deal in the world.
‍

Three fatal mistakes, what to do instead