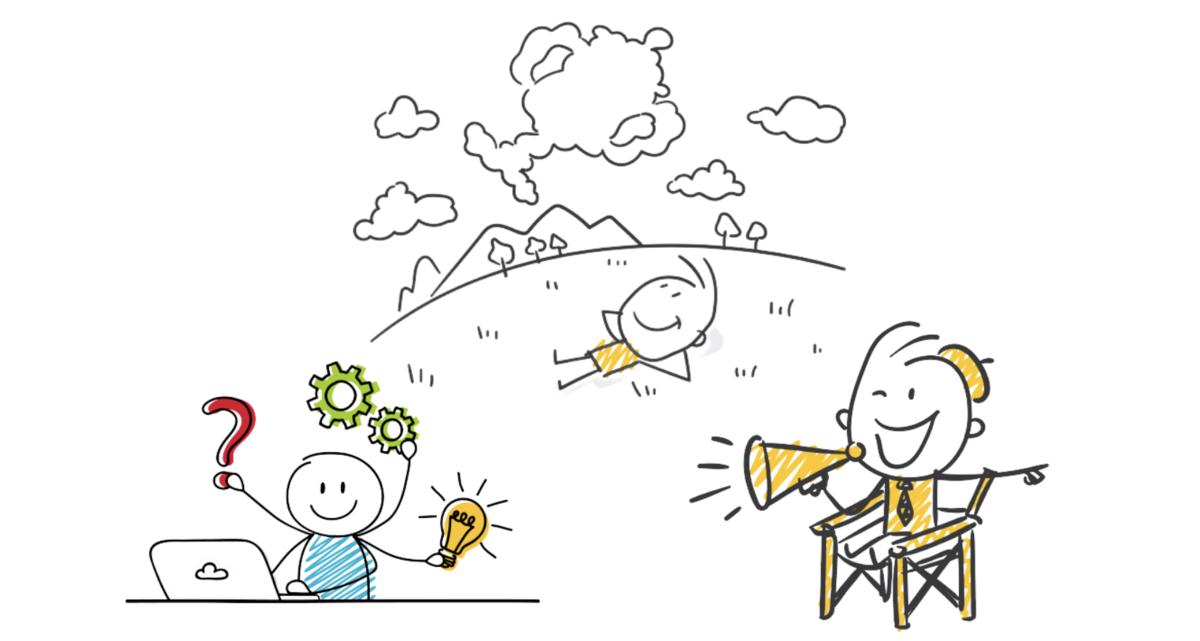 ‍TLDR: job titles are deceiving; instead, get real about the tasks and the breakdown between entrepreneur, manager and doer

Inside every person are three voices: the Entrepreneur teeming with new ideas, the Manager keen on organizing chaos, and the Doer who keeps the gears turning.

Some voices are loud and clear, others are barely a whisper. The balance between them predicts performance and fulfillment. It can help you find the right job, identify super-collaborators and hire better.

He just landed a PM job at a famous tech company, as a new grad no less! He impressed the hiring manager with his energy and track record of launching products while still in school. The job validated his self-image: budding entrepreneur earning a big opportunity.

Within two months, Xander is deflated. He’s been assigned to work on tiny features, while other PMs have been given slightly bigger projects. Mostly, he’s disillusioned by how much mindshare is dedicated to the core product instead of dreaming up new ideas.

Is this really tech life?
‍

Xander is driven by his Entrepreneur voice. The Doer in him emerges when inspiration strikes, not like 9-5 clockwork. He’s learning that the company needs people who are predominantly Doers. They’ve had a massive hit and are intent on protecting what they’ve built.

Xander has two choices. He can quit and find an early-stage opportunity focused on breaking new ground. Or he needs to realize that the tension between the creative Entrepreneur, focused Doer and organized Manager is how great products are born.

Instead of being bitter, he can view this as an opportunity: work on execution and learn from the managers around him. He also realizes that if he wants to invent, he needs to find a fitting team. Next time, he’ll ask questions like:

She’s a beloved Director at Xander’s company. Given her stellar reputation, she’s quietly being courted for Head of Product at a hot startup. She’s wined, dined and swept off her feet.

Within weeks of joining, she faces a rude awakening. She inherited a skeletal team of 2 PMs, and a scope so massive it requires her to do the day-to-day execution. Every day brings a new fire. She has the headcount to hire more people, but selling candidates on a less proven brand has been tougher than expected.

Is this really startup life?
‍

Yasmin is guided by her Manager voice. She was a Doer a decade ago, but her true calling is putting people in the right seats and setting up processes to keep everyone on the same page. But if she wants to survive her new chapter, she has to get back into the weeds.

Yasmin realizes that in her eagerness for a breath of fresh air, she skipped through due diligence. She should’ve asked the CEO more questions like:

He’s a talented engineer at the startup Yasmin joined. The hiring spree, however, has made him feel disconnected to the company. What used to be a wild adventure has turned into yet another corporate job. He knows he can build, so he sets off to start his own business.

It was exhilarating at first, but then reality settled in. Instead of just doing the work he loves, he is now in charge of everything. Every day is a war against self-doubt.

Is this really entrepreneur life?
‍‍

Zac had been unknowingly sheltered. To survive in the wilderness, he realizes that he has to summon his inner Entrepreneur. He needs to ask more questions like:

Instead of coloring inside the 9-5 lines, he now has the chance to draw his own picture on his own timeline. He also needs to channel his inner Manager: take care of insurance, track expenses, file taxes, get incorporated, and overall, be more organized.

Xander, Yasmin and Zac share one big mistake: they liked the title of their next pursuit and assumed they would slide right in.
‍

Title is sexy, tasks are boring. But quality of life is determined by the tasks you do, not the title you carry. A fancy title might make you proud for a few weeks, but you’re stuck living with the tasks indefinitely.

Hiring managers seek “world-class”, but there is no standard! It shifts based on what you’re hiring for.

Instead of fixating on the title, get real about the tasks. It starts with understanding yourself.

What is your ratio?

Everyone has a natural baseline. While adapting to new environments is doable, your strongest voices map to your superpowers. They put you ahead of the starting line. Also usually more fun and lucrative to double down on your superpowers than repair the gaps in your armor.

In my case, I’m a new corporate escapee looking to build a business. I’m a strong Doer but a timid Entrepreneur, so I’m drawing out the latter through a diet of reading, brainstorming and experimenting with new ideas.

When you understand your baseline, you’re in a better position to land fitting roles, be more realistic about a tough transition, and pick people who bring out the best in you. The greatest partnerships have been between those with complementary voices. Think Jobs’s entrepreneurial spark and Woz’s technical acumen, or Munger’s risk-taking with Buffett’s pragmatism.

To know thyself is the beginning of wisdom.‍

👋 P.S. Want to join a top startup? Check out who's newly funded and hiring or compare your startup salary & equity, now includes hundreds of data points 😊